Forthcoming:
'Leader-led Jihad', eds Bruce Hoffman and Fernando Reinares, New York: Columbia University Press, due for publication in 2012. Featuring 'Operation Pendennis: A case study', by Sally Neighbour.
'Four Corners: The Stories that changed Australia', edited by Sally Neighbour, due for publication in 2012, ABC Books HarperCollins.
'The Mother of Mohammed'
'You know it's a good book when you can't stop talking about it'
Pulitzer Prize winning author Geraldine Brooks in The Age, 12 December 2009

'Sally Neighbour's book is an excellent insider's account of a convert's journey to radical Islam. Not since Lawrence Wright's The Looming Tower: Al Qaeda and the Road to 9/11 has a book provided as much detail on the inner workings of the global jihad'

Buy The Mother of Mohammed 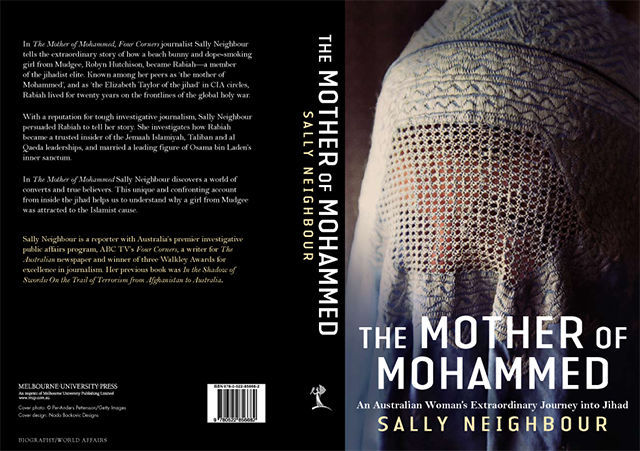 Review by Mia Bloom, Political Science Quarterly, Academy of Political Science, New York, Spring 2011. Link to pdf
The Mother of Mohammed published in the US by the University of Pennsylvania Press. Link
"A must read for anyone wanting to go beyond the headlines and understand in depth women who marry terrorists and form the emotional backbone of terror." Marc Sageman, author of Leaderless Jihad and Understanding Terror Networks. Link
The Mother of Mohammed short-listed for the 2009 Walkley Non-Fiction Book Award. See announcement
Indonesian edition to be published by Gramedia in 2010. See review in The Jakarta Post
Indian edition published by Jaico Books, November 2009. Link
Rabiah interviewed on the BBC World Service Outlook program.
Listen to the interview
About The Mother of Mohammed
The Mother of Mohammed is the story of Australian woman, Rabiah Hutchinson, a Muslim convert who has been at the heart of the global jihadist movement for more than twenty years, as a result of which she is now deemed a threat to Australia's national security and banned from travelling abroad.
A former Mudgee girl and one-time hippy backpacker, Ms Hutchinson joined the Islamist uprising in Indonesia in the 1980s. She became a follower and friend of the radical cleric, Abu Bakar Ba'asyir, and was employed as an English teacher at Ba'asyir's famous Ngruki boarding school in Central Java. In the '90s she took her six children to north-west Pakistan to join the mujahidin struggle against the Communists in neighbouring Afghanistan. She spent four years working in a mujahidin hospital and orphanage in a camp run by the famed Afghan warlord, Abdul Rab Rasul Sayyaf. In 2000 she moved to Taliban-ruled Afghanistan where she married a senior al Qaeda figure and became a member of the jihadist elite. After 9/11 she and her children spent several months on the run in Afghanistan, as US cluster bombs fell around them, before escaping across the border into Iran where they were detained under house arrest by the Revolutionary Guards.
The book provides a unique and confronting insider's description of the rise of the global jihadist movement.  It is an unprecedented first-hand account from a Western participant of a series of critical episodes in recent history, such as the emergence of the Islamist movement in Indonesia, the mujahidin struggle in Pakistan and Afghanistan in the 1990s, life in Taliban-ruled Afghanistan, the split in the al Qaeda leadership over the 9/11 attacks on the United States, and the subsequent US-led bombardment of Afghanistan.
The Mother of Mohammed combines a gripping narrative with meticulous journalistic research to authenticate and corroborate Ms Hutchinson's remarkable story.
Rabiah's childhood home in Mudgee
Class photo from Mudgee public school
Rabiah's 2nd husband Mohammed Pujo
The Kabul women's hospital where Rabiah worked
Extract published in The Australian Magazine
Click here to view PDF
Story in The Weekend Australian
http://www.theaustralian.news.com.au/story/0,25197,25403977-5012694,00.html
Press Release from Melbourne University Publishing
media release
Audio: Sally previews The Mother of Mohammed
http://www.theaustralian.news.com.au/story/0,25197,25403977-5012694,00.html
Reviews
''amazing, riveting, a fantastic feat of journalism"
Geraldine Brooks, Pulitzer Prize winning author of 'March', 'People of the Book' and 'Nine parts of Desire'.
"an extraordinary story" The Age, 13 July 2009
"In this meticulously researched account, author Sally Neighbour makes no judgements about Rabiah's decisinos. The reader is left to admire Hutchinson's combatic determination, but equally be horrified at the risks she took and her naive interpretation of jihad.' The Herald Sun, 6 June 2009.
"Sally Neighbour has done a magnificent job"  The Canberra Times, 9 May 2009.  Read review
"The book is hard to put down"  The Economist, 18 June 2009.   Read review
"a beautiful non-fiction story"  The Jakarta Post, 1 November 2009   Read review
Interviews with Sally
Conversations with Richard Fidler, ABC Radio, 11 May 2009. Listen to interview
Jon Faine's Conversation Hour, ABC Radio Melbourne, 6 May 2009  Listen to interview
Radio National Breakfast with Geraldine Doogue, 4 May 2009  Listen to interview
Talk at the Stanford Library, Sydney, broadcast on ABC Fora, 18 June 2009  Watch the video
Radio Australia, Connect Asia, 5 May 2009   Read transcript or hear interview
Interview with Rabiah
BBC World Service, Outlook program, broadcast 30 July 2009.
'Rabiah Hutchinson - the surf chick who married into Al Qaeda's inner circle'. Listen to the interview 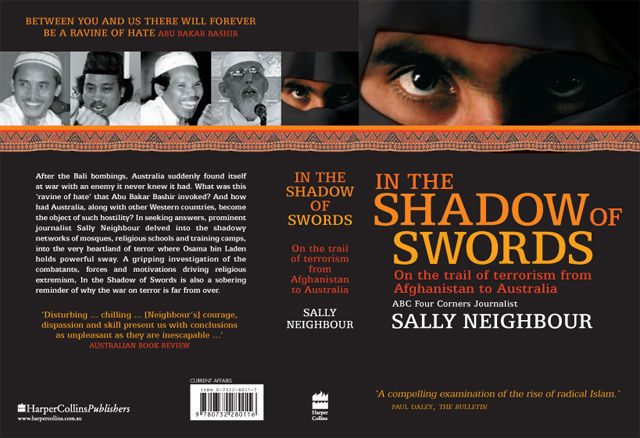 'In the Shadow of Swords'
* Winner of the General History Prize at the NSW History Awards, 2005.
* Named by The Economist magazine in its 'Peerless Pages: Books of the Year, 2005'
"A remarkable story about what it all means to Australia"
The Bulletin.
"If you only intend to read one book about JI and Bali, this is the one I would recommend."
Clive Williams, Director of Terrorism Studies,
Australian National University.
About In the Shadow of Swords
After the Bali bombings of 2002, Australia suddenly found itself at war with an enemy it never knew it had. What was this 'ravine of hate' that Abu Bakar Bashir invoked? And how had Australia, along with other Western countries, become the object of such hostility. In seeking answers, prominent journalist Sally Neighbour delves into the shadowy networks of mosques, religious schools and training camps, into the very heartland of terror where Osama bin Laden holds powerful sway.
A gripping investigation of the combatants, forces and motivations driving religiouis extremism, In the Shadow of Swords is also a sobering reminder of why the war on terror is far from over.
Information from The Publisher
Click here to view.
Reviews
"Disturbing... chilling... (Neighbour's) courage, dispassion and skill present us with conclusions as unpleasant as they are inescapable" Australian Book Review
"A remarkable story (and) compelling examination of the rise of radical Islam in South-East Asia",
The Bulletin, 22 March 2005. Read review
"A thoughtful contribution to the ever-expanding library of books on terror, Sally Neighbour's new book offers an insightful account of Australia's September 11th, the 2002 Bali bombing." The Economist, Peerless Pages: Books of the Year, 2005. Read article
"authoritative and eminently readable", Australian Defence Association Review, Autumn 2005. Read review
Tenggulun, Indonesia 2003
Abu Bakar Ba'asyir, Indonesia 2002
Book Launch for 'In the Shadow of Swords'